NEWS
A Letter From The Chairman

A Letter From The Chairman

Most of you have known me, for the past 30 years, as the Owner/Managing Director of Chemco International. I am writing to you as I have decided, having transferred all Chemco shares into an Employee Benefit Trust, to also take a back seat and become Chairman; allowing the management and our new Managing Director to begin a new era for the long-term security and benefit of the business and its stakeholders worldwide.

I am very happy and proud to have achieved my goal when I started the company in 1990. I had already served various position with its predecessor, starting as Production Supervisor and as a Contract Manager after 7 years! I liked what I did. It was a very challenging industry and when the opportunity arose to buy the business, this is what I did. At the time, I never imagined I would be there for another 28 years; serving the industry and the same company for over 35 years!

The specialist glassflake company I inherited, with a colleague from Bulgaria Mr Kristin Hristov, was no longer considered unique, as many multi-national, conventional paint companies had joined the success of glassflake coatings in the market. For a start-up company of three (1 Secretary and 2 Directors), it could not have been tougher; but I believed in our original range of glassflake products. I had seen what they could do in the real world if done correctly and without compromise! The range however was very limited and only effective for a limited number of applications.

In the early 90’s, a severe downturn in UK and Scottish North Sea sectors forced us to consider alternative markets. This coincided with the opening-up of Eastern European markets. Having a Bulgarian Director enabled us to identify a key market in the Bulgarian alcoholic beverage industry which was suffering from outdated coating technology and needed exports and hard currency. We would soon become market leader, but first we needed a product!

It wasn’t too hard for me to come up with one of the first solvent-free systems that could be widely utilised, however the technology had many limitations; and specialism was required for its application. It took us a step closer to the goal, I would say; after all, it was only the beginning!

Towards the end of the 90’s that market became flooded by cheap imports and it was time to move on! At that point; it was only sensible to split the company. Mr Hristov took the local assets of the company and continued in Bulgaria, developing a substantial and successful contracting and distributor business. Today it is one of the prominent group of businesses working from a very beautiful and modern head office in Sofia.

Once again I had inherited a business in serious trouble. Only later would it prove to be third time lucky!

By this time, the company had no major customer-base in UK and glassflake was now widely available from many national and international companies! Ironically, this was the same situation as before we left for Bulgaria and this time I had to face it alone!

By the turn of the millennium, we were still in business, but only just. It was clear I had to either invest in the company and create something new or else give up! The decision to invest and carry on was driven by my vision to create the most innovative company in the field of anti-corrosion worldwide!

By 2001, I had already invested heavily in infrastructure and people; substantially increasing the number of employees. We set out to work on the new technology by listening to what the market wanted and needed. What was needed was clear – environmental legislation, VOC restrictions, health and safety were all topics of the day. Unfortunately, we as an industry were not reacting quick enough and were not satisfying market demand for high performance coatings.

I thought the combination of water jetting as a surface preparation method with coatings that genuinely work could be the way forward, no matter how difficult the task. If this was to be the way forward, we had to be first and why not?! Finding solutions was part of our DNA. Solving the problem of coating onto wet and flash rust surfaces, after water blasting, whilst very challenging, could not be beyond 21stcentury capability and Chemco would go on to prove it!

Being the most stringent in technical matters I could hardly dare to dream of applying a coating on rusty and wet surfaces. We had all been trained to be very strict with surface preparation; but especially with glassflake coatings which could only be applied on Sa 2½ with minimum surface profile of 75 microns (without primers).

It was almost beyond imagination to even think of such an unacceptable act of applying onto wet and/or rusty surfaces! After all, when you cannot believe it yourself, how can you sell the idea to others! Such ideas were ridiculed at best, some thought I’d gone mad!

Many qualified and knowledgeable colleagues in our industry (from many countries) also ridiculed the idea and I had many heated discussions. Unfortunately, that continues to this date; despite many independent tests and 10 years unblemished track record.

I must say this is understandable and the reaction is also proof that these were truly innovative products as they were not and are still not the norm in industry! Quite naturally it was not unusual that most could not comprehend the following concept:

A cautious market was slow to adopt the new technology despite the huge savings brought in time and labour. Consequently, we went through a very difficult period; all the investments, loans and grants were not enough; it is costly to develop such a range of products without much revenue! I continued to believe in our technology. Independent tests and site reports could not be ignored forever and fortunately it was not too long before the investments paid off. By the time of the 2008 financial crisis, we were able to support our bank!

Going through the global financial crisis even stronger than before, we set out to independently verify our innovations by carrying out independent tests to the highest international standards and achieved them all. Today Chemco products are certified and approved by all major recognised international bodies!

Whilst continuing to develop a host of other innovative products, I had achieved my ambition of creating a unique company and products which were and are truly revolutionising the industry!

Today utilisation of water-jetting (at low pressure, not UHP) is commonplace and, in fact, many clients specifically ask for it; they have all experienced major savings and positive outcomes in record times. When we combine the very cost-effective and environmentally friendly surface prep method with environmentally friendly products that work on such surfaces, we have market led innovation.

I am very happy and proud to have initiated such a shift in our industry; our planet needs all the help it can get; especially with the recent temporary setbacks worldwide! I believe we must all help in our own way to achieve this reduction in VOC and carbon footprint, before it is too late; it is our duty to next generation!

I believe through technology and cooperation, we can achieve this goal. I know of no other alternative.

I have spent most of my adult and business life building this company (which I always tried to run as family business); it has become part of me and therefore, I cannot but look after it like my family. As we all know, this job is never done, hence, whilst I am no longer in the front line, I am continuing my support for the company. I have decided to take a back seat at a time when the business is truly flourishing, very strong both financially and technically and with a large number of innovative products. I wish the new Managing Director and our existing employees and management a very successful future!

I believe, now that we have secured its future through EOS (Employee Ownership Scheme), Chemco International can only go from strength to strength. After all, EOS hasn’t been selected out of desperation but because of its continuing innovation and success! Perhaps leaving the family in such safe hands was the most satisfying part of the EOS and perhaps also was one of the main reasons why it felt so right to me!

I think we are the first of many, the future is going to be based on cooperative society; we simply cannot go forward with profit to be the basis of our economy; when it comes to our planet, we cannot afford it!

We can only continue if we have a planet, a home!

Wishing you all every happiness and success in 2019 and beyond! 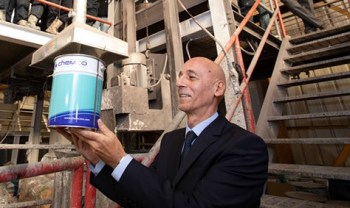